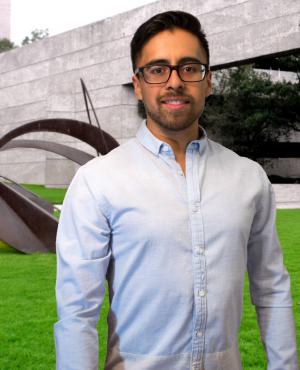 Miguel was born and raised in Mexico City, and has always been passionate about Middle Eastern studies. This passion led him to become the Chief of Staff of the Arab Week in Mexico, the largest scholarly space fostering the study of MENA in Mexico. He is currently exploring interregional comparisons on human rights regimes, specially looking at MENA and Latin America. He is most interested in the intersections between gender, sexuality, and global governance.

He earned his Bachelor's degree in International Relations at El Colegio de México in 2016, where he presented a honor's thesis on transnational LGBT+ activism in Lebanon, Egypt and Iran. He spent a semester as an exchange program student in Sciences Po Paris, where he organized conferences intertwining sexual diversity and religion, and did field work in Egypt and Lebanon for his research project. His research interests led him to volunteer for an UNESCO-led conference on the education sector responses to violence based on sexual orientation or gender identity/expression (May 2016), as well as an English teacher in Hebron, Palestine, during the summer, 2016.

Despite he has interned in governmental offices, such as the Coordination of Advisors to the Mexican Chancellor, and the Mexican Embassy in France, he finds the academia the most exciting space for him to develop his future projects. He is currently a member of the Middle East Studies Association of North America (MESA) and hopes the Global Studies PhD program allows him to pursue a career as a researcher.

The construction of masculinity through HIV in Egypt (to be presented in MESA Annual Meeting, November, 2017.