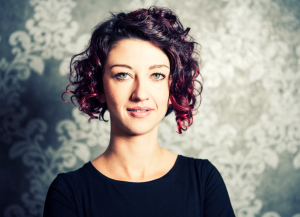 Katja’s interest in cross-cultural interactions and processes of identity building in a given socio-political constellation is not only academic and theoretical, but naturally emerges from her own biography. Katja grew up in a town in Central Germany along the former inner-German border and has studied in the bi- and tri-border regions of Passau (border-triangle of Germany, Austria and Czech Republic) and in Frankfurt Oder (German-Polish border region). She holds a Bachelor’s degree in International Cultural and Business Studies (2009) with particular focus on Latin America and the Iberian Peninsula from the University of Passau and a Master’s degree in Intercultural Communication Studies (2013) from the European University Viadrina in Frankfurt Oder. Her research interests include Global Art and Culture, Cultural Diplomacy, Theories of Cultural Exchange, and Migration and Art.

Located within a new field where global history and material culture studies converge, Katja’s dissertation project ‘Building the Nation with Global Playthings, 1851-1945’ traces the ‘global lives’ of toys from a manufacturing region in Central Germany and asks how the material worlds of childhood have intersected with nationalism and war from the mid-19th century until the end of WWII. Through an investigation of surviving toys in museum collections in Germany, Great Britain and the United States and analysis of archival material related to the production, travel, trade, display, and use of toys, the project seeks to accomplish two goals: First, it reveals the intrinsic historical connections between war and play, and proposes that toys help to normalize war and the nation as main frame of reference for the mobilization of people for war rather than dismissing child’s play as trivial and politically inconsequential. Second, it suggests that investigation of sustained cross-border circulation of artifacts—such as the mass mobility of children’s toys—provides a primary vector of historical interpretation that reveals the realities of a globalized and networked past. It shows us how nomadic playthings came to shape the lives of people across the globe.

Katja is co-editor of the book ‘Chile in Transition. Prospects and Challenges of Latin America’s Forerunner of Development’ (2015) and has been writing for Foreign Affairs, Harvard International Review, Challenge: The Magazine of Economic Affairs, New Global Studies (De Gruyter) and several European journals. She is the book review editor for New Global Studies and a founding member of the UCSB graduate student organization Society of Global Scholars. During the academic year 2018/19 Katja is a visiting scholar in Global History at the Free University of Berlin.